Yes, Cats Get It On 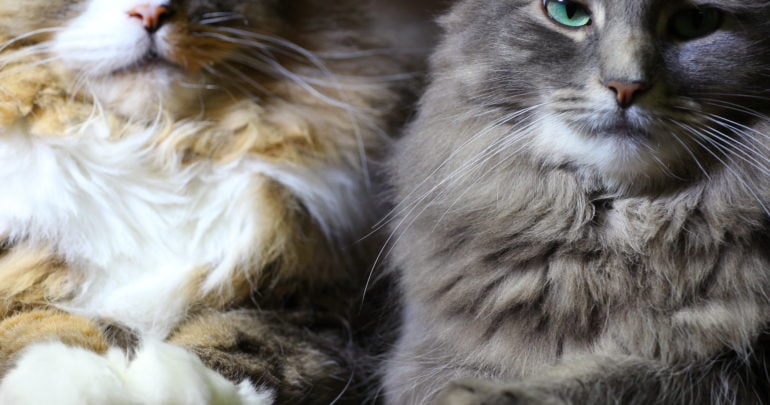 Cat mating and breeding aren't as complicated as dog breeding. Dog pregnancies are downright stressful. Yet even with cats, you still need to know all the phases before those kittens arrive.

So your cat is in heat! You tried everything to keep her inside but she slipped out and now she could be pregnant. Here's everything you need to know about her heat cycle, mating and kitten delivery.

Springtime is known as kitten season but cats have several heat cycles a year. 'Cat estrus' begins as animals reach sexual maturity, usually at about six months of age, although some cats will go into heat as early as four months and others as late as 10 to 12 months.

This means that breeding cats can produce a litter at any time of the year.

According to Spruce Pets, behavioral changes are the norm for cats vs. physical changes. Pet owners should look for the following:

Now that your cat's heat cycle is clearly here and her vocalizing confirms this, Love to Know provides some insight into the actual mating behavior.

"Cat mating is noisy, and frankly, a bit rough. Cats will even scream while they mate. Once introduced, a pair will engage in behavior that looks more like warfare than romance. Although the breeder should be present in case things truly get out of hand, it's better to resist the urge to intervene and let the cat breeding commence naturally. When the male mounts the female, he will latch onto her with his claws and frequently hold the scruff of her neck with his teeth."

Yikes! Your cat is pregnant.

The cat gestation period can vary from as short as 61 days to as long as 72 days according to cat experts at Purina.

"Your cat (queen) often won't show any physical symptoms of pregnancy until she is a few weeks into her term. If you think that your cat is pregnant, take her to the vets for confirmation."

Remember to get to the vet for an ultrasound.

There are five stages of pregnancy that should be on your radar! Catster outlined these for cat owners.

"It will be pretty obvious when your cat goes into labor. She'll start licking her genitals and may even make noises of discomfort. If this is her first litter, she may pace and act anxious. She should give birth to her first kitten about an hour after labor starts. After that, the kittens should come every 15 to 20 minutes until the last one has been born."

Most cats don't need you to intervene. They take care of the delivery quite well on their own. You may need to assist with removing a sack from one of the kittens or tie off an umbilical cord with a bit of string if it continues to bleed after severing from the placenta.

All of this should be discussed with your vet and remember there can be complications.

Always check with your vet first before you determine if your cats' mating is a good idea. A pregnant cat does require time and a commitment to your cat's health and now all her kittens! Consider spaying as well if this was an unplanned pregnancy and then you won't have to worry about breeding season or mating season every year.

The litter of kittens will be adorable but you'll need to find homes for all of them. Those newborn kittens will be busy! You'll thank us as the yowling and meowing during your cat's heat cycle is intense.

Have you ever adopted a kitten from a shelter? Let us know in the comments below!

Yes, Cats Get It On