Everything You Need to Know About the Andalusian Horse 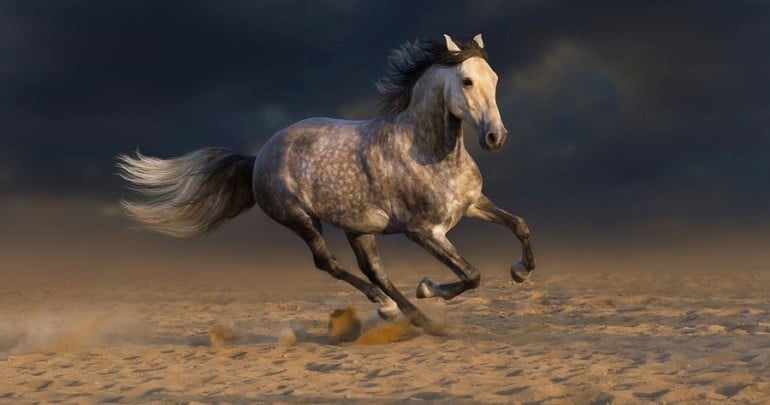 The Andalusian horse is the epitome of elegance.

The Andalusian is a pure Spanish horse (PRE: Pura Raza Espanola) that originated in the Iberian Peninsula. First recognized as a breed in the 15th century, these Spanish horses were bred for the agility and collection required for hand-to-hand combat, and were used as war horses and prized by nobility.

The Andalusian horse has an amazing history, first recognized in cave paintings in the Andalusia region. The breed went on to be revered by Carthusian monks, and Andalusian horses were stolen by Napoleon's army and made their way through Europe. The breed is relatively new to America, only beginning to be exported from Spain in 1962.

The original dressage mount, the Andalusian was performing high-level maneuvers at a time when the ancestors of modern-day warmbloods were still pulling carriages. In fact, Andalusians are the ancestors of the Lipizzaner or Lipizzan horse breed, known the world over for its prowess in classical dressage. They were also used in bullfighting and as stock horses.

Andalusians are still used as dressage horses today, as well as for driving, Western pleasure riding horses, saddle seat, and even jumping. They are athletic and beautiful movers in any discipline, displaying excellent extension, elevation, and cadence in their gaits. Known for their beautiful arched neck and convex profile, common coat colors for the pure Spanish horse include grey or bay, but spotted colors can also be seen. 80% of Andalusians in the United States are grey.

Do you have an Andalusian purebred Spanish horse? Show us in the comments below!

Everything You Need to Know About the Andalusian Horse